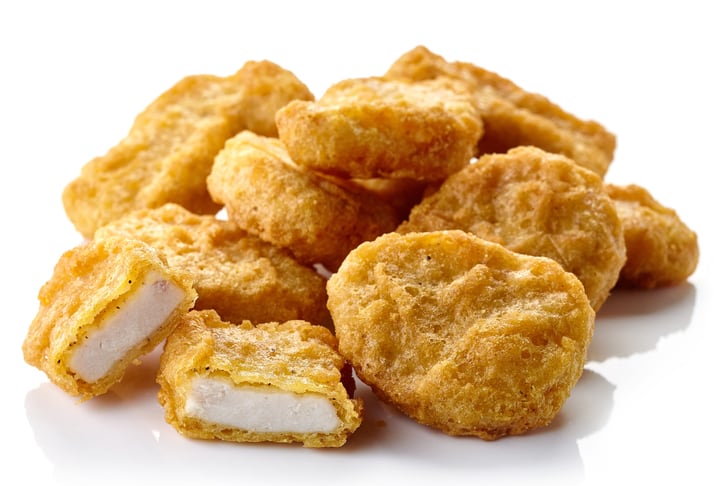 When was the last time you heard a yoga teacher encourage you to focus your Warrior II on a chicken nugget — or to eat that chicken nugget?

We’ll bet you all the awesome swag in our bulldog shop that the answer is a big, fat NEVER.

And while you probably shouldn’t count on our leaders leaning too far into any sort of hardcore chicken nugget trend (though we love a good food splurge as much as anyone), we are more than happy to play messenger on anything hilarious, and Chicken Nugget Yoga most definitely fits the bill there.

What is Chicken Nugget Yoga, you ask? Well, it’s about as simple as it sounds. This summer, comedians Goubran Bahou and Alex Balcombe released a video featuring a series of traditional yoga poses punctuated with breaks intended for (what else?) a bite of nugget. The nugs are also used as props — one nugget balances on a hand, while another rests on the yogis’ backs as they hang out in down dog.

Honestly, you should probably just watch it yourself:

The comedian’s unconventional approach to yoga has inspired its share of copycats and wannabes (or maybe just people who want a good excuse to indulge in chicken nuggets). The staff of a radio station in New York’s Hudson Valley, for example, tried their hand (or, perhaps more appropriately, their mouths) at a parody of the ridiculous moves:

It’s safe to say that Chicken Nugget Yoga isn’t going to take over the legit yoga community anytime soon, but we can definitely get a laugh out of it, anyway. We’ll gladly accept any opportunity to play with our food, and these British comedians definitely have our wheels turning on other typically off-limits foods that we could try working into our yoga practice. Funnel cake yoga? Absolutely! Ice cream yoga? Sign us up.

So, what’s the lesson here, friends? That American comedians need to catch up to their British counterparts? (Probably true.) That chicken nuggets are an important part of a healthy diet? (If only.)

Nope. The lesson here is that the Internet is a crazy, crazy place.

And you know what? We’re here for it.