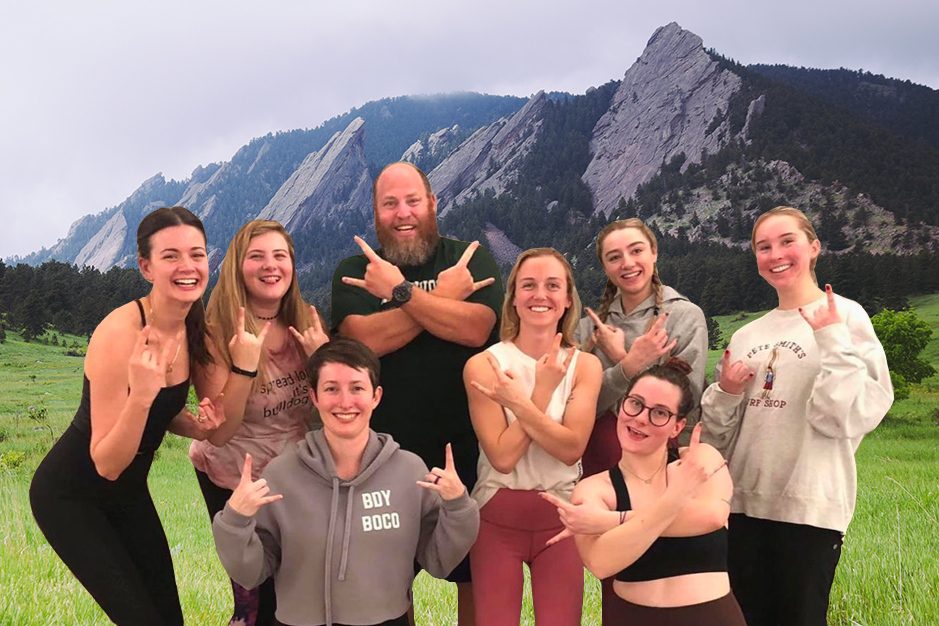 When Alex Krasnick met Bulldog Boulder leader Sarah Woodward at a local taco joint in May of 2019, he had no idea that his life was about to change. In hindsight, he likes to think of the meeting as “total serendipitous coincidence.”

The night Alex met Sarah, he just happened to be taking his one free evening off from a physically intensive wilderness first responder course — an undertaking he’d been wanting to explore for a long time. One year after losing his father, he was finally ready to take the leap. Strangely enough, though, it was this night off that became the real turning point.

Alex and Sarah began chatting over their tacos. Before he knew it, Alex was telling this brand new acquaintance that he’d been thinking of getting into yoga. After five grueling back and shoulder surgeries, he was ready to find new exercise options that would help him build strength and manage pain without physical therapy. An active Coloradoan who’s a regular fixture on the hiking trails and ski slopes, Alex was still looking for something… different.

Enter: yoga. And a serendipitous, coincidental meeting. Plus, tacos.

“Sarah hands me her card,” Alex remembers. “Three weeks later, I emailed her and told her I’d like to get started and asked her what I should do and she told me what class to take. That’s how it all started.”

Although he was confident that yoga would benefit him physically, Alex admits to some misgivings heading into his first class. We’re not really into beating around the bush around here, so we’ll just let him cut right to the chase:

“My biggest concern through my first twelve classes was farting in class,” he says. “I’m not joking. There were days I ate nothing but soft pretzels and Saltine crackers to keep the gas out of my system.” 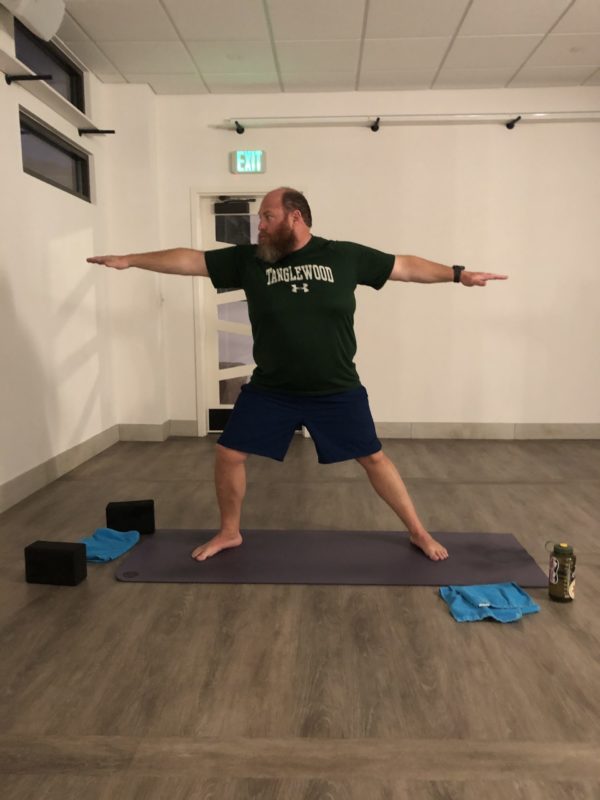 Potential tummy troubles aside, it didn’t take long for Alex to figure out that bulldog was the place for him. He fell naturally into friendships with class leaders and other bulldoggers, who he says pushed him past some of his concerns on the mat while making sure he felt supported at every step along the way. Early in his yoga days, for example, he was worried that his “big guy” stature and minimal flexibility would prove problematic in the studio. Instead, he found class leaders — shoutout to you, Team Boulder! — ready and waiting with straps, encouraging words, and plenty of modification options.

“Those first few classes were rough,” Alex recalls. “I had to walk out of class a couple of times because it was so hot I couldn’t keep up with it. But it started flowing and I was there five nights a week for several consecutive months.” 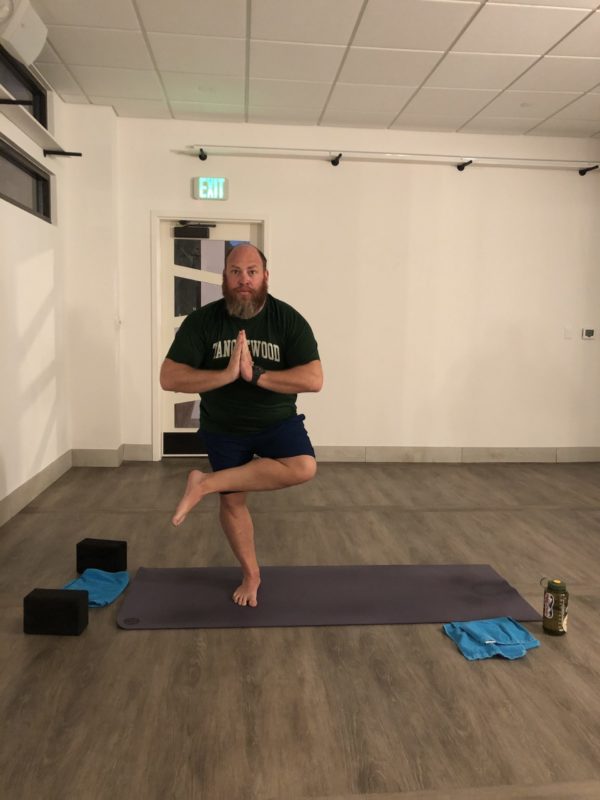 Alex became such a regular fixture in the Boulder studio community that he finished a whopping one hundred classes… in less than six months. And since he’d made a bargain with Sarah early on that if he hit that milestone he would get to pick the music in class one day, the pals who attended his one-hundredth class were treated to thirty-five minutes of heavy metal jams while they got their sweat on.

What Alex has gained from becoming part of the bulldog crew, however, is a lot more than just the unique experience of hitting Warrior III to a soundtrack of his favorite heavy metal band, TOOL. He credits yoga with increased flexibility, better conditioning for the other activities he enjoys, better sleep, and more.

And his goal to better manage his pain? Mission accomplished. Pre-Bulldog, it wasn’t unusual for Alex to take the maximum daily dosages of Advil and Tylenol in a 24-hour period just to get through the day. Those days are gone.

“Do I still have bad pain nights?” Alex says. “Yeah, I do. It’s a permanent part of my life. But the reduction in those nights and the reduction in pain med consumption — it’s been extraordinary.” 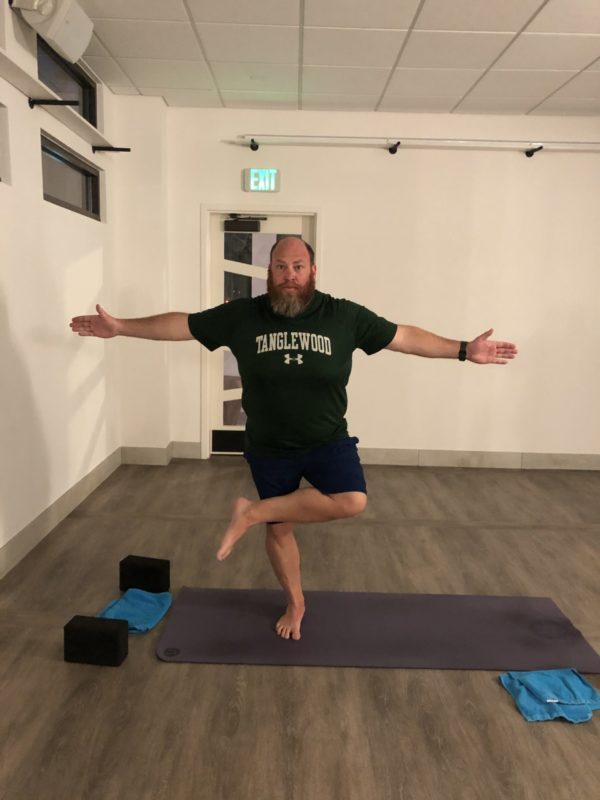 Recently, after taking a bad fall on the ski slopes, Alex started class at the studio with pain that he rated an eight and a half on a scale of one to ten. By the end of class, the pain was cut down to a four — and had shifted from his leg to his back, where he could more easily manage it.

Alex’s pain may have improved since he became a bulldogger, but his command of yoga poses has improved, too. He’s gotten more confident on the mat without ever having looked at himself in the mirror.

“I’ve never looked in the mirror,” he says. “Everything I’ve done in terms of getting better at yoga has been entirely in my head. I’ve evolved and I’m doing things now pose-wise that I’ve nailed.”

Today, Alex is psyched to say that he’s able to get into poses like Full Pigeon… which he never thought he could do because of his perceived physical limitations.

Even with all he’s gained physically from a yoga practice, Alex notes that it’s the community and relationships he’s found in the studio that have been the most life-changing. He considers class leaders and other friends he’s made at Bulldog family and looks forward to the nights after class when they stick around on their mats talking about, well, anything. “It’s absolutely familial. It really is. I’m at the point now where I can’t imagine my life without it.”

Even on difficult days, Alex is grateful knowing that for at least the time he spends in the studio (and he’s typically there five times a week!), he’ll be surrounded by people who make him feel like — in his words — “we’ve got you.”

Alex is now planning his two-hundredth class (yes, the Boulder crew will be celebrating with another heavy metal-infused playlist), but for him, it’s bigger than that.

“As bad of a day as I occasionally have, I know that when I go to that studio for that one hour, I am 100 percent taken care of by people who show me nothing but love. And that is such an unbelievable gift.”

Find out how Bulldog Yoga can change your life! Check out our studio schedules. (Villanova | Malvern)