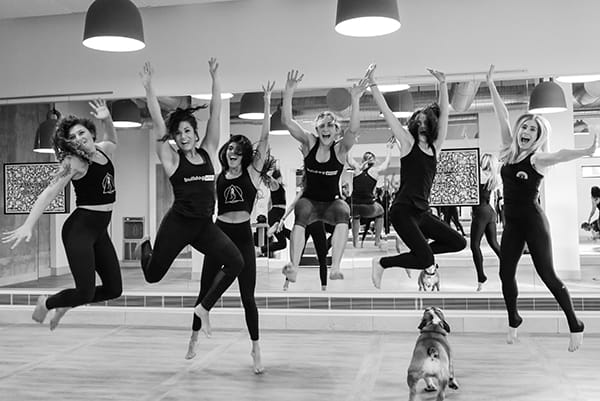 There are a few major mysteries in the universe:

… the meaning of life

… where we really came from

… and, perhaps most confounding, the proper way to pronounce the word “GIF.”

And while the word GIF will likely have us stumped for the better part of the next few decades — is it a hard G sound? or more of a soft J? — we’re grateful it exists, because it’s opened us up to a world of hilarious social media posts and viral content. It’s also created a whole new language through which we can express ourselves and share about our lives. In that spirit, may we present (pause for effect) your standard bulldog yoga class, as told through GIFs.

You’re up. You’re moving. And you have plans to take a bulldog class today. Honestly, you’re already crushing it at life. The day is practically conquered already.

Your workout gear is on and you’re seriously feeling yourself. Has anyone ever looked or felt this good before a workout? Doubtful.

You step into the studio in Villanova or Boulder or you open up your bulldog online portal or app and it’s like, “Hello. I have arrived.”

You’re no stranger to our challenging brand of yoga, but a positive attitude is everything. You woke up feeling like you could do anything, you caught a glimpse of your booty in the mirror on the way out of the house, and then you made a dramatic entrance to class, so you basically have everything you need.

Time to play it cool with some light stretching on your mat. It’s not about being flexible. It’s about getting loose.

Your badass leader welcomes you and the rest of the guests to class and the playlist starts pumping. Once again, you’re reminded of just how cool it is to be a bulldog. Who else gets to listen to The Chainsmokers and Madonna and get their yoga on at the same time?

Wait, but this is actually kind of hard. And why is it so hot?

Maybe if I think about it more politely…

You’re more than halfway into class, and your leader reminds you of what a rock star you are. You look around and remember that you’re not alone in the quest to be the strongest you. Chin up, cowboy.

You’re no longer desperate for a break, but you’re still enjoying a private LOL over the fact that you’re constantly coming back for more of this intense workout.

OK, so there’s kind of a lot of sweat, but it’s a Britney Spears sweat, so it’s no problem.

The leader calls out that you’re in the last stretch — if it’s abs, woof — and you know you’ve conquered the class.

Final rest is gooooood. And you even get to listen to John Mayer or John Legend or maybe some other very soothing musician named John.

You can. You did. You’ll definitely do it again… probably tomorrow. Or the next day, at the latest.